The Making of an Epic Fantasy

There comes a time in every boy's life when he simple must write about a quest. Moreover, a quest in which a hero strives to save the world. Much has been written on this endeavor throughout the ages and I can add little to the long list of works which demonstrate this enduring theme. For it is truly the soul of our art, when the human takes up arms against the gods, the forces of nature, and all the assembled entities summoned by evil or black magic. What could ever be a better tale to tell?

And so it is that I set out on that well-trod path to seek my own fortune, not a fortune of gold and glory but of a history never before written of a world that was at once both strange and full of the unknown as well as uncomfortably familiar. And to take us through this tale of universal drama, a story which by decree must involve dragons, I elected to set the weight of the world upon the shoulders of a dragonslayer. Alas, not only a dragonslayer but the best in the city: Corlan Tang, late to the craft yet already surpassing his seniors, a man with dark secrets - because a hero without secrets is like a cloud without vapor! 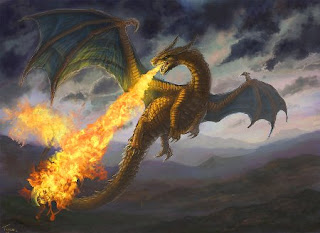 Thus, in the opening scene, I introduce our hero: a hunky man with broad shoulders and auburn hair - a stereotype, perhaps, yet many things will happen to him which will destroy such stereotyping. In homage to those who have gone before, I open our story by setting him in his element: hunting dragons in the well-named Valley of Death, a desert canyon out from the Burg. In the usual circumstances, it should have been an easy expedition, the quota of kills easy to measure. Then home again to the Burg for brew and bedding.

And yet, as readers should know, we must produce an inciting incident! Dragons wing by so Corlan fires his weapon, the mighty dragonslinger, at them! Yet this time all does not go well and he finds himself set upon a perilous journey - first a return to the Burg where everything that can go wrong goes wrong, a situation which does not showcase our hero at his best. Corlan's missteps and miscues, the loss of the expensive cloned hippo he had ridden into the Valley, not to mention the jealous meddling of his rivals in the Dragonslayers' Guild - likely instigated by uber-rival Braden Batiste! - all lead to Prince Vilmer banishing him from the Burg for one full year, after which Corlan may be allowed to return if he has acquired enough dragonware to prove himself.

His fate sealed, Corlan says farewell to his mistress, Petula. He is taken by guards before dawn to the palace precincts, there to be outfitted for a long journey and sent on his way back into the Valley of Death. He is given two cloned giraffes as pack animals and an extra quiver of iron bolts to shoot from the dragonslinger. Lowered into the Valley, Corlan discovers one of the boys from the palace kitchen, helping with the giraffes, has decided to run away. Of course, the compounding of troubles is always a good way to start a quest tale. Our hero must suffer under ever harder hardship! 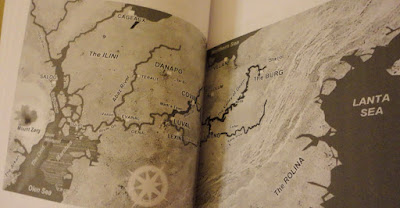 And so Corlan, Master Dragonslayer, and Tam, a curly-haired boy of 12 from the kitchen, set out with their giraffes, Pex and Elo, heading to some place far, far away. Corlan has heard talk of a vast marsh at the far end of the Valley of Death, a place where dragons lay their eggs. He believes if he were to go there, he could destroy all their eggs and doom dragons once and for all time. That act would surely earn him a welcome back into the Burg, and back to his Petula! It seems as good a plan as any for spending a year under the dragon-thick skies. His sidekick, Tam, agrees.

However, the first step is to survive the first dragon attack....

If they can survive to morning, a journey of a thousand miles awaits them, one that we understand from a multitude of literature past and present must necessarily be set with perils unknown, for the way westward has never been explored by those from the Burg. Yet Corlan will encounter dangers, distractions, and detours at every turn! Only by his stubborn will, his skills in dragonslaying, and a little help from friends and foes along the way, can he possibly reach his destination and achieve his goal: to save the world from dragons!

And yet, even as our hero's determination to succeed is attacked each day, the gods have much in store for Corlan: the tests are many, and they are harsh - for in any Epic, the hero must be crushed by all he opposes, for, until that moment when there is nothing left yet he does still rise, he is not, nor ever shall be, a hero!

How often have the Curious touched down here?

DeConstruction of the Sekuatean Empire